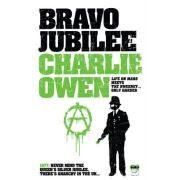 Charlie Owen is a British Joseph Wambaugh, in a way. He tells stories about beat cops, many of them very funny and many of them very violent. Bravo Jubilee has a plot of sorts, concerning DCI Harrison's pursuit of a Turkish gangster, Sercan Ozdemir, who has been trying to set up shop on Harrison's turf in the dead-end town of Handstead (known by one and all as Horse's Arse), near Manchester. But the plot is only a framework on which to hang a series of comic-but-naturalistic vignettes not too different from Wambaugh's classic cop stories in novels and true crime books going back to 1971. Owen's history of Horse's Arse and its team of reprobate cops, which has reached 3 novels now, is embedded in the U.K. (specifically the Manchester region) and in the 1970s, recalling (as the book jacket proclaims) the reprobate (and sexist) cops of TVs Life on Mars (the original, not the U.S. version) at least as much as it recalls Wambaugh. The considerable comedy of Bravo Jubilee, leading up to the Queen's Jubilee, is offset by a grotesque form of torture and murder that owen dwells on frequently and gleefully, but all in all the book is more comedy than crime novel.
Posted by Glenn Harper at 5:31 PM