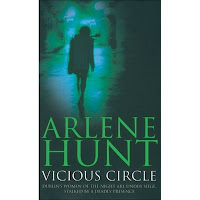 Arlene Hunt's first novel, Vicious Circle (from 2004), is quite different from her subsequent Dublin detective series: Vicious Circle is more violent, has a more thoroughly split focus, and is definitely more noir. The novel doesn't at first offer a specific point of view or central character. Gradually, from the shifting focus on a murderer, his victims, several cops, some prostitutes, and a police raid on a brothel, several key characters emerge: garda Sergeant Michael Dwyer and his boss, Jim Stafford; Amanda Harrington (prostitute and dominatrix) and her business partner Marna; and a big-time pimp named Paul "Tricky" McCracker. A few other characters become important later on. As you can see, it's a complicated story, with two basic plotlines (a serial killer and a ruthless pimp) that criss-cross and then cross back again. Hunt skilfully controls the complex plot so that the reader is never in doubt as to what's happening, where, and to whom. The narrative moves along briskly among the several characters, with a lot of detail about the working lives of both the gardai and the hookers. The story picks up considerable speed as it moves along through various victims and several twists and turns, toward a wild ride in which everything seems resolved (but isn't, quite). There's also a sort of coda, a bit like the ending of the film Body Heat, with the ones-that-got-away not quite happy to have escaped--but Hunt uses the coda to clarify some plot elements that she has previously concealed from the reader in a way that doesn't quite adhere to the unwritten contract between reader and writer/narrator: We are in one character's head often enough that we may feel slightly deceived when we find that there was something quite different going on in the character's head, something we're not privy to. Still, Hunt's initial effort has a lot to recommend it--she doesn't lean on the serial killer plot too much (and like some other bloggers have said recently, I am really sick of the serial killer plot), the world of the prostitutes rings true without being salacious, the characters are vivid and believable, and the cop shop is drawn so clearly that we might have expected the setting to recur in a series quite different from the somewhat less dark series with which Hunt has continued her writing career. Her first effort is an interesting venture into the darker realms of narrative and of modern Dublin.
Posted by Glenn Harper at 2:13 PM