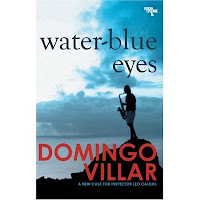 Descriptions that I had read of Domingo Villar's Water-blue Eyes (translated from Spanish by Martin Schifino and published in Arcadia's EuroCrime series) made it sound comic and low-key, and it is both those things, but it's also an interesting crime novel from an interesting part of the world, the city of Vigo in Galicia, Northwest Spain, a region with its own language and character. Villar's team of detectives, Inspector Leo Caldas and his assistant, Rafael Estévez, bears some resemblance to that of Barcelona's Alicia Bartlett-Gimenez (gender notwithstanding): an educated middle class boss and his crude sidekick, except that Estévez is larger and cruder than Bartlett-Gimenez's version, and he's also an outsider to Galicia, a device that Villar uses to much effect as he is frustrated repeatedly (to the point of violent comedy) by the regional trait of refusing to answer questions directly. The other key device (repeated almost to the point of becoming irritating) is the recognition of Caldas by everyone he meets as a radio personality (in fact, the novel begins with him in the studio enduring--rather than enjoying--his role as "Patrol on the Air" police spokesman). The mystery around which the story revolves is the gruesome death of a jazz musician (a unique murder weapon evidently chosen for its capacity to make everyone in the story (and a good portion of the readership) squirm. The story takes a familiar arc (the police treading water and getting nowhere, then suddenly making a discovery after another murder), but nothing is as direct or simple as it seems--in fact, Villar uses a trope that I haven't seen before: the police make mistakes because they miss blatant clues that the murderer has deliberately left for them, even though the investigators are in fact following the path the criminal wants them to take. The resolution to the mystery is, however, not in the end that unusual. But the light tone of the prose, the interesting if somewhat familiar central characters, the evocative imagery, and the effective immersion in Galician culture, gastronomy, and even city planning combine to make this a very worthwhile crime fiction read--and it also has a virtue much ignored these days: it's rather short, at about the length of classic crime fiction of the 1940s or '50s, a pleasant interlude rather than a long-term commitment, in terms of the reading experience. Spain is getting to be an interesting and varied source for crime fiction now, as well.
Posted by Glenn Harper at 9:04 AM

I went to a talk Villar gave at the Edinburgh Book Festival, and he was very conscious of the length issue - he seemed definitely to have aimed at being concise. And I think it worked, since despite being a reader who generally prefers length (I read too fast) I enjoyed Water-blue Eyes. It also had a nice touch with music - I enjoyed the saxophone riffs rather more than one too many lists of favourite Stones/Beatles/Mozart songs I've encountered in other novels recently.

Villar also had some amusing things to say about the way outsiders react to Galician round-aboutness. If I remember correctly, the sidekick character may in part be an echo of some of his wife's frustrations. Oh, and he started out in radio, which may or may note explain that sub-plot.