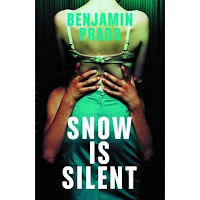 Snow is Silent, by Benjamín Prado (translated from the Spanish by Sam Richard), has elements of James M. Cain and Patricia Highsmith, in a story that announces one crime in its opening paragraph, describes the planning of a robbery and the execution of a murder, moves on to a femme fatale, police interrogation, double cross, prison, and a final revelation. Plus there’s an element of the mystery-puzzle: the narrator announces at the beginning that he is one of the three main characters, one of whom will commit the crime, but he refuses to allow the reader to know which of them he is, concealing himself for the rest of the story in a third-person narrative that is omniscient with respect to all three of the characters, and promising to reveal who he is at the end. Sounds like a crime novel, or perhaps even a traditional mystery. And in a way it is, but it’s first of all a literary novel that’s just using the form of a crime nove. How can we make that distinction? I won’t say all, but a lot of literary novels are ultimately about writing rather than the story or the events and characters in the story. Snow is Silent is about, in a circuitous way, the writing of a novel about a novelist whose friends are helping him write a novel. Setting aside that very literary conceit, the Snow is Silent is most concerned with the construction of fiction: it follows a dictum of Modernism that a work of art is actually about itself, or more specifically about the inherent characteristics of a particular art form (the most famous statement of this sort is by Clement Greenberg, who said that modern painting is about the chief characteristic of that form of art: flatness). Fiction would then be about the chief characteristics of that form of art, the construction of a text or the writing in itself. Modernist writing, or literary fiction in the era after Modernism, can be both interesting and fun, but the very common, reflexive focus on the writing (and on writers) can be irritating for a reader who has come to a book for a story about something other than writing a story. Snow is Silent is clearly written, not in a turgid or academic style. Though it gets started on the crime story rather slowly, the narrative suddenly picks up speed, and moves rapidly through a cascade of events and revelations in short chapters that are almost like scenes in a film--except that the writing, and the conceit of the writing of a novel as the subject of the story, continues to be prominent. There is a certain reflexive quality in a lot of crime fiction: Ken Bruen is constantly referring to crime writers, the Spanish novel I reviewed here yesterday features a victim whose bookshelves are filled with crime novels, and the fact that his bedside table holds an Andrea Camilleri novel as well as a philosophical treatise by Hegel is a prominent plot point. But Prado’s book uses the crime form mostly to talk about about telling stories, and Bruen or Domingo Villar or John Harvey (and there are very many other examples) are referring to other crime writers as homage, as shorthand clues to the reader about the context of the story they’re telling, as a form of showing us who a character is by showing us what he/she reads, or as clever asides from a writer to the reader. The motive of the writer is in these cases more about telling a story than telling about writing. Is this a distinction that seems to hold up? Does it make Prado’s book sound more appealing or less? The cover of the U.K. edition, pictured here, is very effective in suggesting one strain of the plot (one man's obsession with a woman), but perhaps for that very reason misleading about the nature of the book (as well as suggesting that the relationaship goes a bit further than it actually does). Still, it's a great cover.
Posted by Glenn Harper at 10:12 AM

The plot seems interesting as the author didn't reveal who he is in the novel. Really a must read for crime-novels afficionado.

I have read numbers of books and essays from various writers. I can say that the plot and the tying of knots is of less important than to how the writer weave his words.

I can say, Dr. Jekyl and Mr. Hyde is not an A+ when it comes to plot, but by the way it is written, you will never forget some lines.