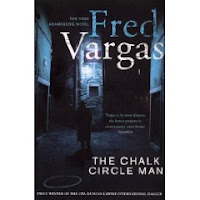 We finally have the first of Fred Vargas's Inspector Adamsberg novels in English (as The Chalk Circle Man), after 13 years and 4 other translations (plus one from her other series). There is perhaps less problem with the publication out of order than there has been with some other authors (I'm thinking of Jo Nesbø for one), since each of the Adamsberg books uses Vargas's odd assortment of characters and effects, without too much crime plot running from one book to another. What we do get, finally, is a glimpse of Adamsberg's early days with his team of detectives, showing with his first big case how he both brings them around and frustrates them with his intuitive style. We also get a fuller perspective on the love of his life, Camille, though she is onstage for a very brief moment (as is typical of the series)--and their relationship is one of the distinctive features of this series. The events in The Chalk Circle Man evolve from an encounter between a female scientist and a blind man in a bar, and from Adamsberg's interest in (and fears about) a series of blue chalk circles that are appearing, with a cryptic text, around single mundane objects on sidewalks and streets in several of Paris's arrondisements. The plot is as quirky as we now expect from Vargas (and it's difficult to imagine the impact the book might have had on its original readers since we do know now what to expect from Vargas), and there is poetry and history as usual, but there is not an overarching historical or mythical or stylistic "maguffin" as in some others of the books (the plague, a detective who speaks in classic Alexandrine verse, werewolves). Instead, we get a full picture of Adamsberg himself, a portrait of the logical Danglard coming to terms with Adamsberg and his methods, and we get a couple of sudden twists in the investigation, one perhaps predictable and the other genuinely out of left field (the latter regarding motive, and though well prepared for when you think back through the book, is a quick shift, a flick of the book's serpentine tail.
Posted by Glenn Harper at 11:11 AM