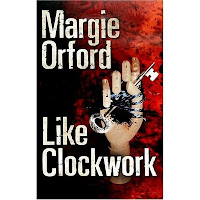 Margie Orford's new (in the U.K. and U.S.) Like Clockwork was actually originally published in S.A. in '06. Orford has wrapped a serial killer novel in a book about violence against women in a broader sense, and the two levels of the novel get a bit confused. The central character, Dr. Clare Hart, is similarly pulled in two directions: she's both a profiler with ties (both personal and professional) to the police and a journalist investigating the exploitation of women for profit for a documentary film. There are a lot of instances in the book of human trafficking and sexual slavery, domestic violence, and gang violence directed against women (in initiation rituals for just one example), many of them aimed at exactly the same young women being targeted by the serial killer. The expected tension of a serial killer story is therefore dissipated a bit among all the other violence and misery, until the last few chapters, when the serial killer plot and the attention of Dr. Hart both come sharply into focus. Orford's novel is a good portrait of the racial and cultural stew of Cape Town, and she gives a good sense of the city and surroundings, from middle class to working class to slums, from Table Mountain to Robben Island. And she also gives a good sense of the violence against women both in this particular culture and in human society at large. The story is no more "overdetermined" than another Cape Town thriller reviewed here a few weeks ago (Roger Smith's Mixed Blood), and both effectively use the gang violence plaguing the city. Smith plunges his characters into the maelstrom while Orford keeps her central characters at arm's length from the violence (though Hart's sister is a recluse and gang victim), logical outcomes of their approaches (Smith's is not a series book and Orford's has all the signs of being the beginning of a series). Along with the better known Deon Meyer (and I suspect other writers that I haven't discovered yet), Smith and Orford bring the violent, beautiful, and vibrant city of Cape Town to life on the page--each giving emphasis to different aspects of life there. I'm looking forward to more from all of them, and hoping for advice from anyone who knows other high-quality crime writers from S.A.--The excellent blog Crime Beat South Africa is one resource; are there others? And does anyone have recommendations about which S.A. writer I should try to get hold of next?
Posted by Glenn Harper at 6:39 PM

hi Glenn, I don't have any recommendations other than the two you mention - I have just read two Deon Meyers and enjoyed them tremendously, and will read this debut by Margie Orford soon.
Dorte over at the Friend Feed group is creating a global reading challenge for next year in which people will review books from each of the continents and add a link at her site - so you may well get some recommendations via that route. Hope you will join in (you write the review on your blog as usual, then post a link to it on the global challenge blog). I'm looking forward to Antractica in particular ;-)

For a sample of SA crime writers, you could try Bad Company, edited by Joanne Hichens and released last year.