The Redeemer, by Jo Nesbø 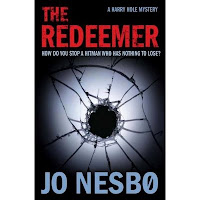 The Redeemer is Jo Nesbø's best novel so far. It has less of the grand, historical plotline than The Redbreast, and the three-novel Tom Waaler plot ended with a previous novel (ostensibly), but The Redeemer has an elegant structure, considerable humor, and a zig-zagging story that continually loops back on itself. Plus it has the usual virtues of a Nesbø novel: engaging characters, interesting insights on Norwegian and European culture, and a tightening suspense that is released only at the end (after several false "endings" along the way). In this book, a number of plotlines intersect, with a phrase or even an object dropped at the end of a section only to be picked up (with comic and ironic effect) in the opening sentence of the next section (occurring miles away and in a different context. Not just a literary game, these transitions are simply one element of the lively and involving story. There's a Croatian hit man going to Oslo for one last job, a gaaggle of Salvation Army officers and soldiers in Norway involved in some very human interpersonal relations, a wealthy family struggling to maintain its fortune, and detective (and central character) is losing his boss, his only protector in a police hierarchy that is hostile to Hole's independent ways. The new boss is a military man returning to the police with all the subtlety and empathy one might expect from a special forces type (but he turns out to be a complex character rather than a cardboard one). There are dire consequences for some of Hole's team, and the hitman takes a difficult and circuitous route toward the fufillment of his mission. And in fact, the Waaler plot (those who've been reading the Nesbø as they have come out in English will know what I'm talking about) does in fact return in a surprise ending that has (one can see in retrospect) been prepared for symbolically all along. Nesbø is one of only a few crime writers who can manage the complex structure, the large cast of characters, and the wide ranging storylines in novels as bulky as The Redeemer, while also keeping the reader moving rapidly along from one cliff hanger to another. Because of the complexity and the references to earlier stories, it's probably best not to start reading Nesbø with this one, but if it's the only one you can get hold of, go ahead--and hold on to your hat, it's a wild and often funny (as well as satisfying) ride.
Posted by Glenn Harper at 5:39 PM