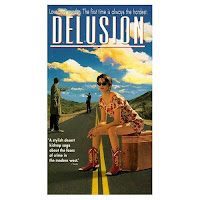 Seventeen or 18 years ago, I saw a neo-noir movie set in the American desert, about a computer executive who embezzled from his company, drove to Nevada, and picked up a couple stranded along the highway because their car spun out and flipped over. A couple of years later, I remembered that scrap of plot, but had forgotten everything else about the movie, the name, the actors, the director, everything. And since then, I've been intermittently trying to remember or find the movie again. I finally recovered the name, Delusion, by looking at lists of neo-noir movies, arranged by year, and following up on the names that seemed likely. Now that I've found it (and obtained a VHS, which I watched last night) I'm not sure it was worth all that trouble (though on Amazon it gets an average of 5 stars from the small number of reviews)-- sill, it's a pretty good movie. Directed by Belgian-born writer, director, and producer Carl Colpaert, Delusion was originally set for release as Mirage, in 1990, but another B-movie came out just ahead of them with that name. So the film company regrouped and re-released it as Delusion (a false start that may have contributed to the lack of success and subsequent obscurity of the film. Jim Metzler, who was also in another good neo-noir (One False Move) just a year or so later) is George, who has embezzled about a quarter million dollars (it sounded like a bigger amount in 1990) from his failing computer company and is trying to get to Reno to start up a new company. Kyle Secor (of Homicide: A Life on the Streets) and Jennifer Rubin (of many a later B-movie) are the hitchhikers that George shouldn't have picked up (Chevy and Patti). George soon discovers that not only can he not get rid of them, they're on their way to meet Larry, a gangster (Jerry Orbach, of Law & Order) who's exiled to an old trailer parked next to an isolated desert lake. What ensues is a series of confrontations between Chevy, who turns out to be a hit man for the Las Vegas mob, and George, whose money is hidden in the spare-tire compartment of his Volvo (which Chevy and Patti have stolen)--and Patti turns out to have her own agenda. There are a couple of twists and turns, as well as shots that are taken straight from old Westerns and Antonioni's Zabriskie Point (both films were partly shot in Death Valley), leading to an ambiguous old-West ending that is partially resolved in a little surprise buried in the credits. Alas, it's not too likely that anyone will have much of a chance to see the movie, since it's only available in VHS, and not exactly easy to find. But it's an early example of neo noir with a reach that just exceeds its grasp, in terms of its art-film aspirations and its filmmaking style. I can recommend it, though, for an evening's quirky entertainment, if it's available for a reasonable price--it deserves a better fate than its current obscurity (and a better fate, perhaps, than its characters experience in the end).
Posted by Glenn Harper at 10:35 AM

I'm suprised I never saw this a 'video dungeon' in the early 90's. good tip.