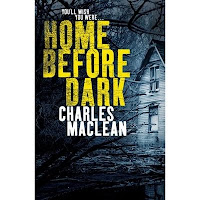 Charles Maclean achieves a composite of several modes of crime fiction in Home Before Dark: Gothic (complete with Mrs. Danvers from Rebecca), a serial killer, a cautionary tale about Internet relationships, a paranoid double cross (is the good guy really the killer), and so on. The first third of the novel includes very effective portraits of Florence and Venice with a murder plot aboard the Orient Express (no less), as well as murders of three young women. The middle third is about the rich, English father of the first murdered girl seeking to find the murderer by any means necessary, while also conducting an on-line affair with a young woman in New York. And the last third is a spiralling chase sequence with the killer chasing a sort-of private detective, the father, and his on-line amour. All of the above is skilfully done, though for me it all goes on a bit too long. But there's one creepy aspect to the whole story that suggests Maclean has larger concerns: the reader is put in the position of voyeur in an elaborate Second-Life website constructed by the killer, and at a certain point it's difficult to avoid the feeling of also being a voyeur in the killings of the young women (and the threats to another one)--implicating us, the audience, in the Gothic-Postmodern-sociopath/serial killer narrative as active participants--which of course, we are.
Posted by Glenn Harper at 6:03 PM

Hmmm! Sounds a rather busy book!

Congratulations on your well deserved nomination for a Spine Tingler award.