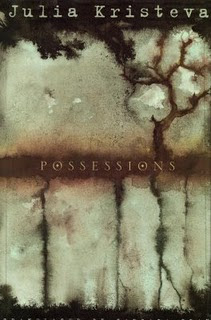 It's not all that unusual to find credentialled French intellectuals writing crime fiction: recent examples include Fred Vargas and Dominique Manotti, two of the most successful French crime writers. But I was surprised to discover recently that one of the most famous of all French intellectuals, the Poststructuralist-feminist-psychoanalytic theorist Julia Kristeva, has also written crime novels, three at least (three have been translated anyway). They feature journalist and amateur detective Stephanie Delacour, music-loving police detective Northrop Rilsky, and a fictional country, Santa Varvara, that resembles Kristeva's own birthplace, Bulgaria, after the fall of the Wall (and the corruption and instability of post-Soviet Eastern Europe is a theme in the books). The first of the three stories, The Old Man and the Wolves, deals with werewolves and myth, also the themes of one of Fred Vargas's novels: and if Kristeva's is not exactly a conventional crime novel, neither is Vargas's. The second of Kristeva's murder is Possessions (more on that in a minute). The third Delacour novel, Murder in Byzantium, deals with a serial killer, a cult, and Byzantine history—Kristeva has called it her anti-DaVinci Code. Possessions was for me the most accessible of the three, both in terms of the story and in terms of my ability to get the book for a reasonable price. It deals with the murder and decapitation of a translator, Gloria, who is a friend of Stephanie's, during the night after a dinner party attended by Stephanie and several hangers-on in Gloria's Santa Varvaran circles (her deaf son's speech therapist, a couple who are in the perfume business, etc.). Gloria's dead husband is posthumously a famous painter and her current husband (in London at the time of the party) has achieved financial success in dealing the painter's work. The novel alternates between fairly straightforward sections (such Rilsky’s rather Agatha Christie-esque interviews the dinner party guests, who are naturally the prime suspects) and more digressive meditations in which Stephanie and others think or talk about headless Gloria, psychotherapy, philosophy, feminism, etc. But these digressions are far from dull, and though given in poetic language that is not always lucid, they're suggestive, interesting, and actually do relate to the crime at hand, as well as to the genre of crime-writing (including the fact, exploited by others in the field, that in a murder mystery, the essential event has already occurred at the beginning—and in this case the discovery of the murderer or murderers is not the conclusion of the story, which ultimately hinges on the decapitation rather than the death). The primary themes of both the rational sections and the more emotional and digressive ones are dichotomies of deafness and vision, speech and painting, music and language, the "logical landscape of Paris" and the murky dreamscape of Santa Varvara, and a primary topic is sexuality (presented in graphic as well as more intellectual terms). While neither the novel as a whole nor the conclusive but also allusive ending would satisfy all readers of crime fiction, Kristeva's Possessions is not less successful within the genre than a number of other, more recent novels that bend and stretch the rules of the field. And Kristeva doesn't condescend to the genre: if her writing is perhaps more philosophical in tone than most crime writers, she and other writers have established beyond doubt that it's possible to write crime fiction without pitching to the lowest common denominator of the reading public. Kristeva expects a reader to understand some cultural references (though none are particularly obscure) and to follow her at least part of the way into her philosophical themes, but Possessions is a fully realized and innovative mystery novel.
Posted by Glenn Harper at 7:00 PM

Glenn-I will pick this one up next week. Away for the fourth.