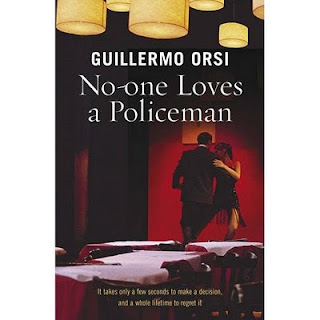 Guillermo Orsi’s No-One Loves a Policeman is the latest Argentine Crime novel to make it into English, and perhaps the lightest in tone (in spite of the very dark events and the equally dark melancholy of the main character). The narrator is Gotán (a nickname based on back-slang for his former favorite activity, tango), a former cop and currently a salesman for a bathroom fixture company. The setting is December 2001, on the verge of a coup. In the middle of the night, a friend calls to ask him to come to the southern beach town of Mediomundo and without asking questions Gotán leaves his Buenos Aires apartment and heads for the south. When he gets there, his friend is dead on the floor, pitching Gotán into a morass that includes his friend’s daughter and current and former wives, the local police, a medical examiner, the collapse of the national government, a revolutionary organization, gun running, corruption, the press, and his own longing for his former lover and tango partner (who left him when she found out he’d been a member of the “National Shame,” the national police force. There’s a lot of movement back and forth from Buenos Aires to Patagonia, from one gang of thugs to another, all told in Gotán’s laconic, comic, and entertaining voice. The voice, in fact, is what holds the novel together: the plot doesn’t so much progress from one event or revelation to another as shift back and forth from a disastrous encounter in one town to a disastrous event in another. The ending includes some surprises, though, as well as a comic take on the heroic ending of many a thriller (and Western), with the ragtag gang of “heroes” appearing to save the day (sort of, and a little late). Argentina’s politics and history pervade the narrative and underlie the sardonic tone of Gotán’s language, as politics and history also underlie another recent crime novel from Argentina, Ernesto Mallo's Needle in a Haystack, but Orsi's novel is (while equally dark) less elgaic and more comic, perhaps more humane and definitely exhibiting a spark of optimism within the gloomy realities.
Posted by Glenn Harper at 11:07 AM

I've traveled to Buenos Aires a couple of times and in each trip I surprised with something new, people, restaurants, parks or the architecture. There is always something amazing about this country. In my next trip I'll check for a Buenos Aires real estate realtor in order to buy a property, yes, that crazy I'm about Argentina.