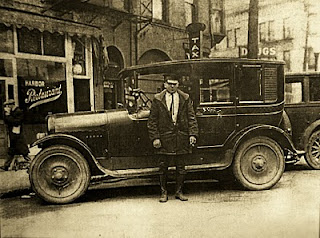 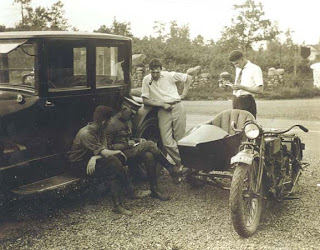 Reading the scenes in Guillermo Orsi's No-One Loves a Policeman in which he dramatised a fake police raid (staged only for P.R. purposes and actually facilitating the illegal arms trade rather than hindering it--I reviewed the novel here yesterday) reminded me of a story that John Cotten, who was my father's age and knew my family's history, told me many years ago, in Atlanta (*the photos attached here are unrelated to my story, except to illustrate a couple of the elements in it—they’re historical images plucked from the web and aren’t related to Atlanta or my story, directly). The numbers racket was very big in Atlanta before World War II (it was the unofficial, and illegal, precursor to today's official lottery). You would buy a number, called a "bug." from the guys who ran the racket. The man who came around the shops at 13th Street and Peachtree Street, where my family had a flower shop, selling numbers was called "The Bug Man" by his regular customers. From time to time, during the 1930s, the Atlanta police and the "bug men" would stage a chase down Peachtree Street from a few blocks north of the Loew's Grand Theatre downtown to the 10th Street strip, near the Peachtree Art Theatre and our flower shop. Everyone knew when the chase would take place, and people would come out of the shops along the way to watch, as if it were a parade or a scene from a movie, and when the cars had all arrived at the north end of the chase, the "bug men" and the cops would all go out for a drink together. One of distant relatives was a police sergeant who didn't know how to drive a car: his specialty was standing on the running board of a police car (which he got my father to drive when my father must have been 16 or 17) during the chase, brandishing his pistol, and jumping to the running board of one of the racketeers' cars as if he were making an arrest (shades of John Dillinger or the Untouchables). A few years later, in 1939, the Loew's Grand was the scene of the premiere of Gone With the Wind, and Mr. Cotten (who was just starting a career on the railroad, as a Pullman Porter) and my father both got jobs parking cars for the premiere. Ten years later, Margaret Mitchell, author of Gone With the Wind, stepped off the curb in front of the Peachtree Art Theatre and was run over by a taxi.
Posted by Glenn Harper at 7:28 AM