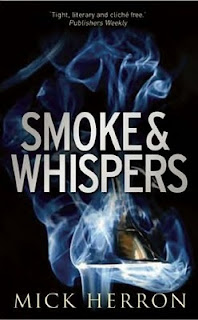 Mick Herron wrote 4 detective novels featuring Oxford private detective Zoe Boehm--though the first one delayed Zoe's entrance until near the end, and in the last one, Smoke and Whispers, she appears on the first page as a corpse floating in the Tyne River in Newcastle. Zoe is present in most of the book through the memory of the main character in Down Cemetery Road (the first Zoe book), Sarah Tucker, who was also a minor character in The Last Voice You Hear, the second. Smoke and Whispers also features the serial killer from The Last Voice, whom Sarah suspects of Zoe's murder, and one from Cemetery Road, Gerard, the hilariously annoying dinner guest. If that sounds like the series is tied together by ongoing threads of character and plot, it is, but each novel is also independent.
Sarah travels to Newcastle, stays in the same hotel where Zoe stayed (and from where Zoe had sent her a postcard), identifies her body, and speaks with two police detectives. But instead of continuing to work with the police, she follows lines of coincidence that she begins to find, not least the presence of Gerard in the hotel. And Gerard leads her down another plotline connected to Cemetery Road, an orphanage that may have been involved in criminal activity. Beyond describing Sarah's investigation and the orphanage subplot, I can't say much about the story without giving too much away—though Herron is less twisty here than in Cemetery Road or the excellent Slow Horses, both of which exhibit abrupt and entertaining changes of direction. In fact, the biggest surprise in Smoke and Whispers is one that is telegraphed in advance by Sarah's voice in the internal dialogue that takes up a good part of the narrative, though a reader is encouraged to question her judgment all along by Sarah's own doubts about what has happened or is happening.
Smoke and Whispers is sometimes comic, though not as funny as the beginning of Cemetery Road, and is also pervaded by a sense of mortality, though not in quite as moody (almost morose) a fashion as Last Voice. It's also lighter than either of those books, both in tone and in the thriller aspects of the plot, but as with all of Herron's writing, Smoke and Whispers is always interesting and entertaining, and anyone who starts the Zoe "tetralogy" will be rewarded by continuing with the series (the third volume, Why We Die, is a very entertaining U.K. "take" on a genre that in its U.S. manifestations can be called "redneck noir"). I only discovered Herron with his latest book, Slow Horses, and it says something about his skill that I have quickly worked through his whole output and expect to seize the next one whenever it appears.
Posted by Glenn Harper at 1:29 PM

Great to stumble on this book with UK links. Sounds like a terrific read. As soon as I relax from promoting my new novel, Pursuit To Paradise, must get to grips with it.

Thanks for giving my books such a thoughtful appraisal, Glenn - much appreciated.