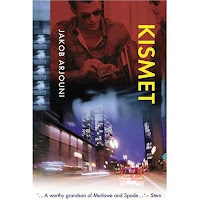 The most recent Kayankaya novel by Jakob Arjouni, Kismet, was released in English translation by No Exit Press recently (translation by Anthea Bell--I should remember to credit the translators more often). All of the Kayankaya novels channel the spirits of Marlowe and co.--Arjouni's detective stories are some of the purest examples of the hard-boiled, smart-mouth detective still in circulation. All the Kayankaya novels also deal to some extent with the ethnic diversity of today's Germany, which has accelerated as the novels have been released (the earliest books were written before unification, I believe). And Kayankaya himself is a native German of Turkish descent, a fact that colors his daily life in many ways, particularly in the reaction he gets from various people along the way in his investigations. In Kismet, there is a dizzying array of Albanian, Bosnian, Turkish, and German gangs, and the victim of an extortion attempt, a Brazilian restaurant owner, is the "maguffin" that sets the story in motion. Kayankaya and his friend Slibulski attempt to help the Brazilian but are forced into firing their weapons at the mysteriously silent, bewigged, and face-powdered extortionists are killed. The detective's attempt to discover who his victims were and what's going on lead him into the shifting sands of the gang culture of Frankfurt. Along the way he keeps getting beaten up (a normal feature of his investigations) and finds an innovative though destructive way to escape being murdered--in the process of which he acquires a new client: a young Bosnian girl whose mother has been forced into the service of the Croatian gang Kayankaya is pursuing. The girl, Leila, hires him to find her, and the pursuit of her quest as well as his own pursuit of the Croatians brings him full circle, in a plot twist that dramatically highlights the consequences of violence (as well as affirming the detective's alliance with the noir tradition). In the plot's twists and turns, in the wisecracking voice of the narrator-detective, in the vivid portrait of Germany today, Arjouni gives us a striking portrait of the tribalism underlying European nationalisms today. Arjouni is the author of several novels outside the Kayankaya cycle that are concerned with literary subjects and with the culture of rootless youth, but to me the Kayankaya novels are his most effective platform for not just crime fiction but his larger literary ambitions as well. I would say that no one can claim to know what's going on in crime fiction or in the ongoing development of noir and detective fiction in particular without taking Arjouni into consideration.
Posted by Glenn Harper at 4:47 PM

Thanks for this review and introduction to the Kayankaya novels Glenn, it looks like I will have even more books on my TBR pile.
There seems to be a whole world of German crime fiction that I have not read.