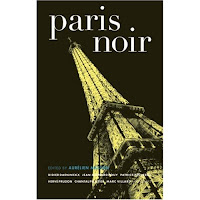 Paris Noir, edited by Aurélien Masson (director of the Série Noire series at Gallimard), like all the recent Akashic Noir collections from cities outside the English-speaking world, presents the reader with a certain melancholy pleasure. A pleasure, because the collections are uniformly valuable and enjoyable samplings of crime writing from Havana, Paris, Istanbul, and so on; melancholy because most of the writers have not been otherwise translated, and these stories are all we are going to get any time soon. Only two of the writers in Paris Noir have had full-length novels translated, as far as I know: Chantal Pelletier (whose Goat Song was published by Bitter Lemon) and Didier Daeninckx (who had several novels published by Serpent's Tail a few years ago). On the basis of the other stories here collected, the standard of crime fiction unavailable to non-French readers is very high, at least as high as what is available in English already. There's another "Paris Noir" collection, as you may know, published by Serpent's Tail and edited by Maxim Jakubowski, reviewed here earlier this year. The Jakubowski volume included a number of English and American writers, with others translated from the work of French writers (including one of the best crime writers around, Dominique Manotti). But Masson's collection is entirely French, 12 stories that are deeply embedded in the city, not ostentatiously but casually revealing streets and alleys tourists don't see, places nonetheless in the shadow of the Eiffel Tower and other monuments. The Revenge of the Waiters, by Jean-Bernard Pouy takes a group of waiters on a tour of the city in pursuit of an old man they used to see every day but has now disappeared. Politics and crime and philosophy intersect along the way, as one might expect in this most philosophical of cities. Christophe Mercier's Christmas story draws a weary private detective into a dark tale drawn from film noir and classic gangster movies. Romance is important in a number of the stories, in unexpected ways: a chauffeur and a prostitute in Marc Villard's tale, an old man and a young foster-grandchild in Dominique Mainard's. And an unflinching portrayal of violence and violent men is another common characteristic, particularly in stories by DOA and Salim Bachi. But violence, love, and weary souls are intertwined inextricably in all the stories, in often poetic and always interesting ways. This is a first-class collection of stories, and a tempting morsel of what's going on in French in crime fiction.
Posted by Glenn Harper at 7:40 PM