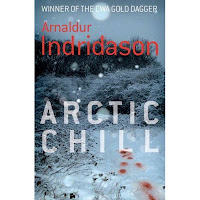 The new Erlendur novel from Arnaldur Indridason, Arctic Chill, has an overarching metaphor of frozen loneliness that pervades the story and also clarifies the character and motivation of the senior detective. Along the way, his fellow detectives Elínborg and Sigurdur Óli, also reveal more of themselves--particularly the latter (Elínborg's personality and private life have been illuminated a bit more in the previous novels in the series). And we also get the final act for the most sexually ambiguous character in crime fiction, Marion Briem, Erlendur's mentor--a retired detective who is never (as far as I've found) referred to with a pronoun (except for one possible reference in the current novel) and described repeatedly in ways that refuse to clarify that male/female given name. Marion, by the way, is said to mean "sea of bitterness," singularly suitable not only for this resolutely alone character and also for one of the chilliest (in terms of emotions as well as weather) of all crime series. In Arctic Chill, a boy whose mother is a Thai immigrant (his father, now absent, is Icelandic), is found dead in the snow near the apartment block where he lived. As is typical among some of the best Scandinavian police procedurals, the detectives are at a total loss, following theories of anti-immigration sentiment, pedophilia, and so forth, while being stonewalled by the family, the boy's school, and almost everyone they come into contact with. The investigation doesn't plod forward, it treads water, until finally a few threads appear that can be pulled, quickly unravelling the pattern. A second plotline, concerning a woman who has disappeared, overlaps with the murder investigation and also revives Erlendur's memories of his brother who was lost in a storm when he was young, a running theme in the series. And here, the lost woman, the lost boy, and other motifs recall a new metaphor from the first novel in the series, Jar City, of sinking along into a bog and being trapped there, yet another image of dread and isolation. One of the blurbs on the back of Arctic Chill calls this series "lyrical," and there are indeed powerful images and elegant phrases, but for the most part the language is simple and direct, another characteristic of some of the best Scandinavian crime writing. These are not novels of sweeping global crime plots or grand schemes. Erlendur and his cohorts are confronted with ordinary human frailties and must deal with them (and their own lives) with ordinary human skills. The result is some of the most involving and effective crime fiction anywhere.
Posted by Glenn Harper at 3:36 PM