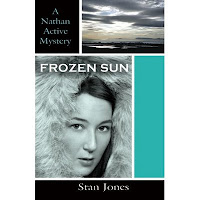 The Nathan Active series by Stan Jones follows the career of a young Inupiaq State Trooper in Alaska, who was raised by adoptive parents in Anchorage but has been posted to the Bush town of Chukchi, where his birth mother lives. If that scenario makes you think "soap opera," you'd be mistaken. The clueless outsider who is nevertheless native "Eskimo" is a perfect vehicle for the investigation of the fault lines between Alaska's various peoples, through the lens of crime fiction. Nathan is a city boy with a strained relationship with both his birth mother and his adoptive family, trying to adapt to the Bush while also trying to get posted back to the city. The first two novels in the series, published several years ago by SoHo Press, follow Nathan in the Bush town and in the Alaskan wilderness. Frozen Sun, the new book, published by Alaska's Bowhead Press, follows the Trooper to Anchorage and an island fishing camp, in pursuit of a young woman who went missing years before. An astute reader will spot some plot elements before the story gets to them, but Nathan's emotionally damaged character, his relationship to both natives and whites in Chukchi, the evocation of life in the Bush, and his tentative attempts at romance are all very appealing. The language of the small town is also very well evoked (in the same way as the Outback language of a similar cultural faultine in Adrian Hyland's Diamond Dove/Moonlight Downs)--for example, Nathan and the other Inupiat townspeople rarely say "yes" to anything, using "I guess" instead. The flavor of the language is portrayed, without any artificial dialect in the speech. And the Bush is never idealized: in Frozen Sun, the descent of a village woman into tawdry homelessness on the streets of Anchorage is central to the story. Nathan's approach to finding her is indirect an conflicted at every point. He makes rookie mistakes (consistent with some of his mistakes concerning local customs in the earlier books) with both the case and his girlfriend. Frozen Sun is, like the first two Nathan Active stories, a subtle, vivid, and effective crime novel that deserves a wide readership: and I for one am looking forward to a new addition to the series, Village of the Ghost Bears, promised for 2009.
Posted by Glenn Harper at 5:30 PM