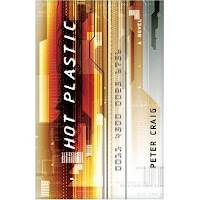 I've just finished Peter Craig's Hot Plastic, published a few years ago. The novel shares a good deal with Jim Thompson's great The Grifters, but I didn't like Hot Plastic very much. I'm wondering why it didn't satisfy, though I usually find grifter novels appealing. One thing that occurred to me is that it violates a modern version of the classical unities, while The Grifters does not. Aristotle said that tragedy should not violate three rules, unity of action, unity of place, and unity of time. That is, one main action or plot with few subplots, one setting, and a time-frame of no more than 24 hours. Obviously, the modern novel violates those rules in all but a few cases (Ulysses, for example), and some forms of the novel (the picaresque, for example) violate all the rules most of the time. But keeping those rules in mind nevertheless provides focus for fiction as well as drama, but crime fiction actually adheres to the rules more closely than a lot of so-called mainstream fiction (think of those family dramas covering four generations and three continents). The biggest difference between The Grifters and Hot Plastic is that Thompson maintains enough of the unities to give the novel a sharp, while Craig's novel is more of a picaresque or romance, following several characters through a number of adventures that don't follow a common plot though they eventually lead back to a kind of repetition of the original situation. Hot Plastic has more of the structure of a mainstream novel, following the relationships of the characters more than any coherent story. Fine, if that's what you're after, but to me it suits the crime genre less well. Even when a crime novel covers a large-ish frame of time; to use just 2 famous examples, Roseanna by Sjöwall & Wahlöö or Faceless Killers by Mankell stretch a police investigation over a considerable time and numerous false leads, but the doggedness of the investigator and the concentration on a single crime maintain a unity of story or action. Adrian McKinty's Bloomsday Dead obviously derives its unity of time from Ulysses, but many other crime novels, from the famous Fast One by Paul Cain onward, adhere to a tight time-frame. And when subplots seem to be more important or as important as a main plot in a crime novel, there's a coherence provided by those plots moving toward a common endpoint or in their relation to an investigation or a crime (as in false leads). Unity of place is possibly the most adhered to of the rules in the kind of crime fiction that I like best (that is to say, localized stories rather than globe-hopping thrillers). So what do you think: Are crime novels Aristotelian? Or should they be?
Posted by Glenn Harper at 7:47 AM

Certainly story (or plot) drives crime fiction more than other genres. There is, usually, a "crime" after all.

Even in the most character-driven crime fiction, say Elmore Leonard for example, there's still a set story with all the action heading towards a conclusion.

A lot of crime fiction, too, has characters appearing in more than one novel, so that pretty much forces the novel's beginning and end to be that of the story's rather than some thematic point in the characters' lives.

I think. Although you could easily make a case for the opposite of what I just said.