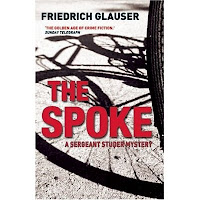 The last of Friedrich Glauser's Sergeant Studer novels emphasizes the Swiss author's common ground with Simenon's Maigret novels, but with Glauser's own meandering style and odd poetry. Ably translated by Mike Mitchell, The Spoke deals with a body found during the wedding of the Sergeant's daughter and his young protege Albert, in a hotel belonging to a sweetheart of Albert's youth. Neither Studer's methods nor the plot of the novel is straightforward, but a contemporary note is struck in one element of the resolution, which deals with predatory lending practices. Set between the world wars (when Glauser was active as a writer), there are some dated aspects of the story, particularly in the author's and the sergeant's attitudes toward women. But there is also a richness of language (without any floweriness, since Glauser also shares a directness of syntax with Simenon) and a rich portrait of rural Switzerland and its dialects. The Spoke is a bit more sedate and introspective (on the sergeant's part) than the two previous Studer novels, resembling the first in the series (Thumbprint) more than any of those in between. And there is really no other crime writer quite like Glauser. Don't be misled by his biography (the addiction and the time in an asylum): his stories are clearly written and composed, but with an oddly off-center quality to both the sergeant's thinking and the style of the writing--creating a totally distinctive voice and an unusual treat for readers looking for a change from the usual crime fiction fare of either the past or present variety. Bitter Lemon Press deserves much credit for bringing Glauser's five novels into the English-speaking world, and also for the distinctive, striking covers of all five.
Posted by Glenn Harper at 7:12 PM

Lovely! I recently bought 5 used Glausers (German editions),a fortunate coincidence.
Wikipedia tells me The Spoke is Krock & Co.Should I begin with it?
What's your favourite?
Marco

Hi, anonymous: Start with Thumbprint--Krock & Co. (or The Spoke) is the 5th and last of the series.
Glenn

" ... an oddly off-center quality to both the sergeant's thinking and the style of the writing--creating a totally distinctive voice and an unusual treat for readers looking for a change from the usual crime fiction fare of either the past or present variety. "

I thought you did a nice job capturing the distinctive flavor of one of my favorite crime writers.
===================
Detectives Beyond Borders
"Because Murder Is More Fun Away From Home"
http://detectivesbeyondborders.blogspot.com/