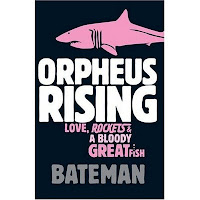 One of the ironies of Colin Bateman's "rebranding" of himself with one name, "Bateman" is that his new novel Orpheus Rising appears in an Amazon search next to "Orpheus Rising: Batman", a comic from 2001. But we're dealing with Bateman, not Batman, here. Or maybe not. Somebody help me here: I've been following Colin Bateman since Divorcing Jack came out in the U.S., and there's no crime writer quite like him. Divorcing Jack and at least the first half of Cycle of Violence are among the funniest novels (much less crime novels) I've ever read. Among crime novelists of the comic persuasion, perhaps only the couple of books of fiction written by Dave Barry, set in Florida as is Orpheus Rising, compare. Naturally, not least because of the Florida setting, Carl Hiaasen comes to mind (and for some reason there seem to be more comic crime novels set in Florida than anywhere else, with the possible exception of Las Vegas--both Barry and Hiaasen have commented on that fact, I believe). Christopher Brookmyre also comes to mind, though his books shift the balance slightly more to the crime than the comedy (more on this comparison in a minute). Later books by Bateman concentrate more on the story and less on the humor than his first two books, but there is still a lot of comedy in most of them, among those I've read in any case. Which brings us to Orpheus Rising, the Bateman one not the Batman one. It's not really a crime novel, at least according to my loose definition but also according to Declan Burke's definition (if you take the crime out of the book is there still a book?). It's related to Flann O'Brien's The Third Policeman, and maybe Orpheus Rising is as much a crime novel as The Third Policeman is (see various discussions about that classification of O'Brien's classic on various blogs and websites). What Bateman shares with O'Brien in this case isn't humor but death and the afterlife: both novels are ghost stories, really. And Bateman isn't really being funny here--he amplifies the strain of sentiment that's a common factor in all his books into an extended love story that is in itself quite effective (it's love that approaches obsession, really, that he's portraying). My wife actually read Orpheus Rising before I did--her only prior acquaintance with Bateman is the movie version of Divorcing Jack (a pretty good movie, not as funny as the book). Her reaction was that it's a strange book. I have to concur--stranger still for anyone who is expecting a "Colin Bateman" book. Or even a Christopher Brookmyre book--the publisher (Headline) seems to be looking for a tie-in with Brookmyre since the covers of this book and reissues of Bateman's other books have a suspiciously similar look to the typical (trademarked, almost) Brookmyre cover. Though Brookmyre did deal with the afterlife in the last (maybe the last?) Parlabane book, Attack of the Unsinkable Rubber Ducks)--is there something about comic crime writers (or Celtic ones in any case) that eventually causes them to break out in metaphysics? In any case, I don't know what to say about Orpheus Rising: It's interesting, and I finished it so it does have its merits (I'm one of those readers who will give up on a book if I don't find it rewarding). But it's not what I hoped for in a new Bateman (and perhaps that's what Bateman had in mind). Any thoughts?
Posted by Glenn Harper at 11:44 AM

Is it as depressing as The Third Policemen (the most terrifying representation of Hell I've ever read)?

Orpheus Rising is not really depressing--the negative aspects of the story are more like a crime novel (pulp noir almost), and the resolution is more upbeat (definitely) than The Third Policeman (but paradoxically, O'Brien's novel is funnier than Bateman's).
Thanks
Glenn