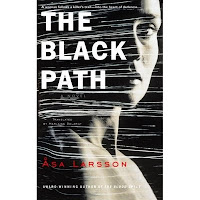 Thanks are due to Barbara Fister (maven of the Scandinavian crime fiction site, homepages.gac.edu/~fister/scandcrime/) and to Maxine Clark (blogger extraordinaire at petrona.typepad.com/) for their thoughts on the intercultural (and particularly Sami) aspects of Åsa Larsson's recently translated The Black Path (see their comments appended to the previous post here). The Black Path stakes out some of the same territory as a couple of other Swedish crime novelists: Henning Mankell (in the confluence of a small northern city and international--in particulr African--conspiracies) and Stieg Larsson (in the investigation of corporate malfeasance and the involvement of a genius/clairvoyant young woman/outsider). Åsa Larsson uses these elements to good advantage, in some ways better than those other Swedish writers, in developing further her series based around lawyer Rebecka Martinsson. As in the first two novels in the series, Rebecka is not always at the center of the action--in fact, Rebecka is probably the most de-centered central character in any crime series, Scandinavian or otherwise. In The Black Path, she's on stage less than 20% of the time, in my guess--one among many voices in what I've previously called a collective novel (meaning that various voices are heard and all contribute to the social context of the story). Other prominent voices here include detective Anna-Maria Mella and her partner, Sven-Erik Stålnacke, various of the mining company executives in the story, a half Indian woman raised by Sami foster parents, a bodyguard at the mining company, and others. But the story begins and ends with Rebecka, first in recovery from a mental breakdown precipitated by the ending of the previous novel and last in taking a step toward a life decision that has been eluding her for the entire series. Rebecka is now a prosecutor in Kiruna, the northernmost city in Sweden, and as such she becomes integrated with the police process in a way that was not possible in the previous novels, in which she was part private citizen and part corporate/part defense attorney. The story moves forward in a tandem fashion, as Anna-Maria investigates the murder of a woman found in an ice-fishing "ark" (with Rebecka's help) and as various actors in the drama reveal their lives in flashbacks and interior monologues. The method works very well for the most part, although those monologues risk marginalizing the police investigation, particularly toward the end of the book. There is a thriller-like conclusion (calling up another prominent Scandinavian writer, Jo Nesbø, whose crime novels have thriller aspects), with Anna-Maria as more central than Rebecka (unlike the first two novels in the series), but the police are at the edges of what's happening, and know (even at the end) less than the reader knows (as he/she has been privy to the thoughts and visions not only of characters living in the present and recalling their past but also the clairvoyant visions of Ester, who is at the periphery of the story until the very end, when she's seen to have been living in the future all along--you'll have to read the book to see what I mean). The spiritual dimension that has been probed by Larsson in previous books in terms of organized religion here appears as a mysticism rooted in but traveling beyond the Sami peoples of the region). The Black Path is admirable, and as I suggested in my previous post, better (in my opinion) than the first two Rebecka Martinsson books, but I do have a little trouble with that marginalization of the cops (and Rebecka as well) that I mentioned above. It's not that the story has eluded the author's grasp but that that it has eluded the grasp of the characters--Larsson is very much in control of her material all the way to the end, but there are so many different elements converging at the end that a number of them seem to miss one another rather than meshing, with characters escaping (almost) into Ester's dreams as well as into those shadowy international conspiracies. All that makes it a very interesting book, but not a book that has the clockwork clarity at the end that I remarked in Allan Guthrie's Savage Night. Åsa Larsson is staking out an entirely different kind of story-telling, perhaps more akin to the confusion and uncertainty of real social and political and the actual criminal justice system. In fact, the more I weigh The Black Path in my mind as I reflect on it and write about it, the more I appreciate what Larsson has accomplished. Which leads me to echo and misquote art critic John Perrault (who said that writing about art is a great way to think about art): blogging and conversing in the crime-fiction blogosphere is proving to be a great way to think about what crime writers are doing and what crime fiction does and can accomplish in terms of both fiction writing and the relationship of the genre to contemporary life.
Posted by Glenn Harper at 10:24 AM

That's a fascinating post, Glenn. I too very much enjoy the "crime fiction quarter" of the blogosphere and our interactions about the books which we are sort of reading at the same time-ish. But I don't articulate my thoughts anything like as well as you. I understand completely what you mean about Rebecka being "de-centred", this occurred to me particularly in the second book in the series but the thought did not gel in my mind. I'm very much looking forward to reading The Black Path when I can get hold of a copy, your review has whetted my appetite.

I love the idea that Ester has been living in the future all along - very well-put, and what an unusual feature it proved to be in the book.

With that thrillerish conclusion, I was far more taken with the characters and their responses in those scenes than with the actual storyline, which didn't really work for me. Not the uncertainty so much as the actual events that unfolded, which seemed pretty unlikely. It was as if the characters were nuanced and three dimensional but stuck in a comic book story. Which is probably too harsh.

I guess when I talk about crime novels using thriller plotlines I mean the same kind of thing Barbara is referring to: the penetration of comic book (almost) elements into more "ordinary" crimes. It's the ordinary crime that captures my attention, most of the time, and my biggest complaint with Henning Mankell, for instance, is that after Faceless Killers, his plots frequently turn on thriller-esque plot devices. But, like Barbara, I was interested enough in the characters and the arc of the police investigation that I liked The Black Path (and I though the title was apt and, in an interesting way, revealed only toward the end.