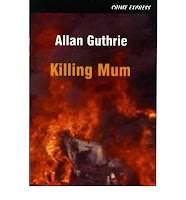 Killing Mum is a tasty morsel, a short and fast sequel, of sorts, to Allan Guthrie's funny, moving, and terrifying Savage Night. It's in the Crime Express series of small-format, short crime fiction (Killing Mum is 96 pages). Carlos Morales, who runs a murder-for-hire business, receives a package commissioning him to murder Valerie Anderson, who happens to be (though few know it) Carlos's mother. It's also addressed to "Charlie," a name that only his wife and his mother use for him, and they don't get along with one another. Killing Mum is tighter and more straightforward than Savage Night, with a smaller cast of characters (basically Carlos, his wife and mother, his baby, and his "firm's" hit man (really just a boy). And the focus is more straightforward, basically following Carlos as he seeks to find out who wants him to kill his mother, first by asking her if anybody wants her dead, then by setting up a "sting" of sorts that goes spectacularly wrong. Guthrie's style is lucid and his characters reveal themselves mostly through their speech, giving the story a terse and realistic quality. Though it doesn't have quite the inevitability nor the comedy of Savage Night, this short novel is another fine contribution to hard-core noir by one if its finest contemporary practitioners--and you can read it in almost the time it would take to watch the movie that its propulsive and "no distractions" style suggests.
Posted by Glenn Harper at 7:58 AM

Long Live Al Guthrie! KILLING MUM is just another feather in an ever expanding quiver of deadly works! More, more!