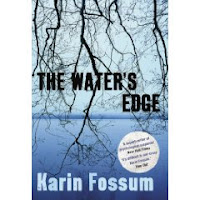 Karin Fossum likes to shake up the formula for her crime fiction (and for crime fiction generally) in her Inspector Sejer novels. The latest to be translated into English, The Water’s Edge (Den som elsker noe annet in the original Norwegian, literayy "he who loves something else), is no exception. A normal pattern for a crime novel (as for a crime TV show like Law & Order) is for a witness to discover a body at the beginning, and then the witness isn’t heard from again (except possibly as the subject of an interview). Fossum sets up a conflict between the husband and wife who discover a pedophile’s victim at the beginning of The Water’s Edge, and then carries that conflict forward through the rest of the book, as they argue about what they witnessed and how it has affected them (there’s even a hint of something else at the very end, akin to the end of Fossum’s Don’t Look Back, but I won’t telegraph that detail). 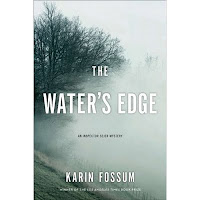 There’s a bit of the usual investigation, feature Sejer and his partner, the younger Skarre, but a large part of the narrative that focuses on them is taken up with an ongoing discussion between them of what pedophilia signifies about the perpetrator and his social/familial context. There’s also quite a bit of text devoted to the victims’ families and to the killer, and the pedophile becomes almost a sympathetic character, in a twisted way. The result of the combination of the more meditative, interior monologues and the dialogues between the cops and the glimpses of the married couple's daily life is a splintered image, a kaleidoscope or jigsaw puzzle that in the end emphasizes the daily tragedies of normal life as much or more than the awful crimes. 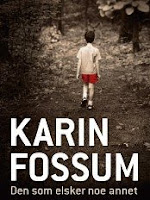 Fossum's ending (really there are plural endings, as each thread of the plot ends separately) emphasizes both the awfulness of the ordinary and what Hannah Arendt called the banality of evil, carrying forward the dark, brooding story beyond the end of the novel and into the reader's life--a most effective ending for a noir crime novel. Another query about covers: The U.S. and U.K. covers above are very similar, but I like the graphic and foggy quality of the U.K. one better myself (that's the one in the middle of the post). The Norwegian cover is much more explicit about the crime at the beginning of the novel--perhaps too explicit? Or are the English-language publishers afraid of visually addressing the pedophilia theme on a cover?
Posted by Glenn Harper at 9:51 AM

Great review. I liked this book very much. The gap between "oh, how horrible!" and the banality of everyday evil was handled very well, and as you say she gives us more than one ending and leaves one unsettlingly open. (Rather as she did in Don't Look Back.)

Small correction - the foggy cover is the US edition. Interesting to see the differences.

Barbara: Thanks for the correction about the covers--I had forgotten in what order I uploaded the images. And Dorte makes a good point at djskrimiblog, that it's not just pedophilia that Sejer and Skarre talk about throughout The Water's Edge, it's paraphilia (hence the original Norwegian title).