M.S. Power and The Stalker's Apprentice 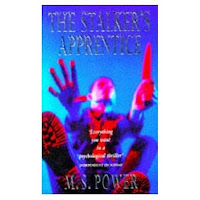 For forgotten-book Friday: Rob Kitchin's recent, highly praised police procedural The Rule Book is not the first book to propose a series of murders that follow rules set forth in a book (though Kitchin's may be the first in which the murderer is also the author of the book). It's a common enough theme, and there's another Irish writer who has used it two novels and a third that is a sequel to one of the first two. Nathan Crosby's Fan Mail, by M.S. Power (whose brilliant Childred of the North trilogy has been mentioned here several times) is a combination of the book theme with a Dick Francis plot (though Francis should have only hoped to write as well as Power). The novel concerns a serial killer novel set in the horse-racing world in England; the author-narrator is dismayed to receive letters announcing that the letter-writer is using the novel as a template for his own series of murders. The plot is conventional enough, and the book is best in its comic elements and in the interplay among its very well-drawn characters. 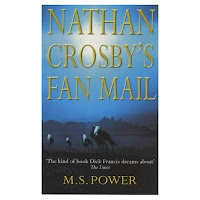 I've just finished Power's The Stalker's Apprentice, which is about a "reader" at a London publishing house who comes upon the manuscript for a novel of multiple murder and begins using it as the model for his own spree. The Stalker's Apprentice (which was made into a TV movie a couple of years ago) is very different from Power's Fan Mail book not only because of its setting in London rather than the racing world, but also because there's some ambiguity about whether the writer of the manuscript is manipulating the main character (who is also the narrator for about half the novel) into committing the murders. I had actually begun to tire of the killer's narrative until I reached the second section of the novel, which (along with alternating parts of the final section) focuses on Inspector Inspector Birt and Sergeant Wilson, the detecties in pursuit of the killer. The cops are interesting and quirky, and for me the police procedural opened the story out of the claustrophobic but oddly affectless world of the killer into a more involving tale. The tension builds as the story moves toward a final murder that is implied in the manuscript (and is the basis of the cops' theory of the crimes), but that killing becomes part of the devious interrelationships of killer, writer, and cops rather than a direct element of the narrative. The ambiguity of the ending implies a sequel--and there is one (it's on my tbr pile), Dealing with Kranze. I don't know whether Power planned the sequel from the beginning or wrote it to capitalize in the success of The Stalker's Apprentice, but it promises to take the story in interesting directions. Power has also written several other books that are, in one way or another, crime novels. His first book, Hunt for the Autumn Clowns, is a bizarre but frequently very funny rural Gothic tale of a slow-witted boy and his Irish-Faulkerian-sexualized environment. There are a couple of murders, but the pleasure in reading the book comes from the eloquent narrative and its twisted logic. Power wrote at least one other police procedural, Vengeance (which I had looked for for years and only recently found), also on my tbr pile, and one other Gothic tale, Bridie and the Silver Lady, which turns the spooky fairy tale on its head (the pubescent girl is the monster rather than the monster's prey). I was led into the search for Power's crime books by the powerful experience of reading Children of the North, but his other books are of various sorts and though always interesting a bit uneven. Clowns is funny and horrifying, in something of the same way as Patrick McCabe's Butcher Boy (though the books are quite different); Power's Come the Executioner, is very like a post-Cold War spy novel or thriller, with the setting of the Troubles in Northern Ireland; Fan Mail is a fairly conventional mystery novel; Bridie is a disturbing tale of psychology and supernatural visitation; and Stalker combines some of the elements of all of the above, along with a chilling portrait of an attractive, upper-middle-class English sociopath or two. What they all have in common is an attention to character and a style that varies from lucid to comic to startling. Two questions about movies: has anyone seen the film of The Stalker's Apprentice? And has anyone seen (or does anyone remember) the TV film made from a Bill James's Harpur & Iles book? I think the film was called "Harpur & Iles."
Posted by Glenn Harper at 8:09 AM