M.S. Power and Dealing with Kranze 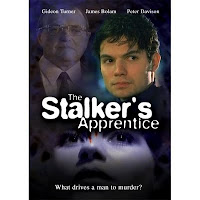 M.S. Power has had something of a specialty in sociopaths in a number of his novels. His first, Hunt for the Autumn Clowns, features a mentally challenged young man who is missing, among other things, any sense of wrong or guilt (and we experience his mind from within in part of the narrative). The Children of the North trilogy features a number of men who are willing to do literally anything in the service of their political cause, whether that be the maintenance of order or the overturning of it. Bridie and the Silver Lady centers upon a young girl who has been molested by her father, retreating thereafter into an amoral egocentricity and delusion that turns murderous. The Stalker's Apprentice and its sequel, Dealing with Kranze (for which I haven't found a cover image, so I'm using an image of the film of Stalker's Apprentice here, and more on that in a minute), deal with Marcus Walwyn, who is simply a pure sociopath: he feels no empathy and feels no emotion other than (occasionally) fright and anger. In the first novel, he kills two people with such dispassion that the reader almost passes by the events without "seeing" them. The murders have no emotional impact for us, no more than for him. But the first novel has a counterweight, in Inspector Maurice Birt, who is the focus of the central third of the novel and half of the final third. In Dealing with Kranze, we only get Marcus's point of view, and it is a claustrophobic one indeed. There is an emotional flatness to the entire book, and when the murders begin, late in the novel, Marcus feels only a tinge of melancholy that his plans have been completed, leaving him without something to do. The reader, as well, gets little emotional payoff from the murders: neither pleasure nor shock. That emotional flatness is the prime achievement of both books: rarely has sociopathy been so completely portrayed, without sensationalism. Lest it seem that there is no payoff at all for the reader, there is considerable black (very black) comedy in Marcus's narration, as he plots his way through daily life and through his "practice murders" and those that are his actual aim. A good deal of the comedy is satire, its target the jingoism of class: Marcus has inherited his mother's class consciousness though he wouldn't admit it, and his view from the very high perch of the English upper middle class, looking down upon all the unfortunates not among that elite crew, is quite funny. And Power, who is Irish, frequently pokes fun at Marcus's attitude toward the Irish. There is a particular irony in the reading experience: the gap between Marcus's experience and our own is so large that we can appreciate his world with the same kind of dispassion that he experiences with regard to everyone else. There is also one of those ironic endings, the criminal tripped up by an unseen flaw in his plan (whereas Stalker ended with an ambiguity regarding a third murder). We can't like Marcus, but we can't hate him: we mostly watch him with fascination and a weird kind of appreciation. But there is a flaw in the first novel that is to some extent corrected in the second. In The Stalker's Apprentice, we never really understand how Marcus is selected by his puppet-master Kranze. We see how Kranze manipulates him, through a manuscript, but there is a big leap of faith in Marcus being the one, the perfect one, who chances upon the manuscript. Given the portrait of Kranze as a master manipulator, would he have left it to chance regarding who would read his story and become his pawn? Is he just unbelievably lucky to get his manuscript to the perfect reader at a publishing house (or is it perhaps Power's wry comment on the publishing industry, in which every writer depends on just that kind of luck). When Marcus seeks a puppet to carry out his plan regarding his revenge, every step is clear. We know how and why the person is chosen and exactly how he is manipulated. Power spares us the cliche of the publishing world that might have accompanied the end of Kranze: though his editor-in-chief tempts him, Marcus is NOT writing his own history, not writing (in other words) the book we are reading. I wonder whether the film version of Stalker's Apprentice uses the ambiguous ending of that book or the rounded-off irony of the sequel?
Posted by Glenn Harper at 10:28 AM