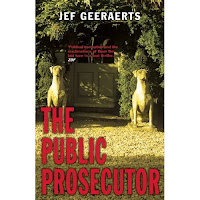 The Public Prosecutor, by Belgian author Jef Geeraerts (translated by Brian Doyle) is a very dark thriller that reminded me alternately of Dominique Manotti's crime novels and Evelyn Waugh's satirical novels. The novel has a terse, almost pictorial style, with multiple points of view (which is what reminded me of various of Manotti's books) and a dark, dyspeptic view of humanity (and of the characters in the story) reminiscent of Waugh's early books, in which there are no heroes and no positive outcomes. Albert Savelkoul, the closest thing to a central character in the novel, is an Antwerp public prosecutor with a good deal of power and plenty of money (some of it not strictly legal), but also a wife he detests and a mistress who is beginning to wander. Courtesy of his wife and son, he will soon also have Opus Dei, the dark underside of Catholic piety, to contend with. What ensues is comic but without jokes: the plot's machinery purrs along toward a conclusion that will not be foreseen but is inevitable, once you get there. There's plenty of violence (social, psychological, and literal) but no murder until the very end. Instead of a crime investigation, the reader sees various self-interested parties in conflict, conspiring against one another even when they don't know that the other is pursuing them. Private investigators working for Opus Dei set in motion one plotline when the bungle a surveillance, leading to the death of a dog (theirs) and a horse (their target's). Savelkoul is thrust into an investigation of his own while his private life shifts from complacency into fears for his health and the discovery of perhaps the love of his life.

He's also plotting against the unseen forces that are ranged against him, and using unsavory associates in ways that implicate him in their violence. Apart from Savelkoul, the most vivid characters are the several Opus Dei members that are seen conspiring to strip Savelkoul's family of their money and property (for the glory of God and Opus Dei) and the family's Polish maid. The Opus Dei sections are quite descriptive (though who knows how accurate) about that secretive organization: chilling in their depiction of ruthlessness and the members' extreme piety. Some readers may not be happy with the conclusion, but Geeraerts is not writing a conventional thriller, he's investigating corrupion in Belgian politics and in religious extremism of the home-grown variety. A sunnier ending would betray his satirical and social purpose, as well as violating the tone and thrust of the story. The Public Prosecutor is one of the sharpest, darkest, and in its own way most enjoyable of the estimable Bitter Lemon Press's recent publications. The actual Bitter Lemon cover suggests the class pretensions of some of the characters--an alternate cover that's posted at fantasticfiction.co.uk is more ominous and ambiguous, but are actually a depiction of a woman with a horse, suggesting one element of the story and also the upper-class ambience. All in all I think I like the one they actually published better.
Posted by Glenn Harper at 8:22 AM

Opus Dei doesn't deserve this. They are just an organization of catholics who go to mass on a daily basis and try to find holiness in ordinary life... they are not some secret society up to no good.

I happily admit I have no first-hand knowledge of Opus Dei. Wikipedia says that "Controversies about Opus Dei have centered around criticisms of its alleged secretiveness,[15] its recruiting methods, the alleged strict rules governing members, its acknowledged practice by celibate members of mortification of the flesh,[16] its alleged elitism and misogyny, the alleged right-leaning politics of most of its members, and the alleged participation by some in authoritarian or extreme right-wing governments, especially the Francoist Government of Spain until 1978," but also says that many people dispute those charges as myths. Wikipedia also quotes Sociologists Peter Berger and Samuel Huntington, who suggest that Opus Dei is involved in "a deliberate attempt to construct an alternative modernity," one that engages modern culture while at the same time is resolutely loyal to Catholic traditions. I have to say I'm less inclined to believe the negative portrait of the organization after learning that Dan Brown's Da Vinci Code demonizes them (I've never read Brown's book and my prejudice against it is thus as unfounded as my willingness to take Geraerts's portrait of the organization at face value.