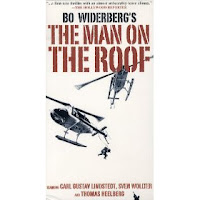 I've been talking about film versions of north-European crime novels in the past few days, a good time to mention the one film of the Martin Beck novels by Maj Sjöwall and Per Wahlöö that Sjöwall has endorsed, the 1977 film of The Abominable Man (retitled as Man on the Roof or Mannen på taket in the original Swedish), directed by Bo Widerberg (famous for his Elvira Madigan outside of Sweden) and starring Carl Gustaf Lindstedt as Martin Beck. Man on the Roof is available in the U.S. (second hand only) as a VHS tape, but outside the U.S. There's evidently a DVD available. The film is shot in documentary style, in available light (but without the busy camera motion of more recent documentary-style fiction films), so that the screen is often very dark and frequently the image is grainy. There's no explanatory material--we see a murder in a hospital and then we follow the very-un-theatrical policemen as they puzzle over what's going on. It's a senior policeman who's been murdered, and he's the "abominable man" of the title. As in the book, Beck relies on Lennart Kollberg, his much younger but solid colleague, to bounce ideas off, while the other detectives, including Einar Rönn (who plods along) and Gunvald Larsson (who irritates everyone but takes action as necessary) take various roles in the story. Larsson is played with some flamboyance (especially in his '70s outfit, now looking ridiculous and perhaps meant as ridiculous by Widerberg) by Thomas Hellberg.

The Larsson role was played to great effect (and with a more understated but still stylish wardrobe) by Rolf Lassgård (years before his role as Wallander in the original series for Swedish TV). The movie moves slowly and deliberately, frequently focusing on Beck's face, which shows concern but not much else, until the killer takes up a position on the roof of an apartment block and starts shooting people with a sniper rifle. Then the very dark comedy of the novels takes over as the police scurry to control the scene and in the process make everything worse. The achievement of the novels and this film is in making Beck's team (mostly) sympathetic while attacking the police force and its methods at every level, from patrolmen to the chief. Overall, Man on the Roof is understated right up to the ending, a cliffhanger that would never be resolved on film, since the subsequent novel, The Locked Room, has never been filmed for TV or the big screen, as far as I can tell. Though I can see why Sjöwall preferred this movie to all subsequent films of the Beck series, in its fidelity to the books, the TV series (with Lassgård, as mentioned, plus Gösta Ekman as Beck) is also very, very good--Ekman (whose father by the same name was a famous Swedish actor as well) is the equal of Lindstedt in showing Beck's concern and empathy without overstating anything (the other TV Beck, Peter Haber, is not quite so understated). The series featuring Ekman is not available in the U.S. on DVD, though all 6 films were shown some years ago first in the American Film Institute film series in Washington and then on MhZ TV network, in its early years of showing international crime series. Of the two cover images I'm reproducing here, based on the same helicopter photo, the American VHS emphasizes the action and the Swedish DVD cover hints at the chaos of the plot (and is therefore more effective, I think).
Posted by Glenn Harper at 7:43 AM

I remember seeing this movie when it came out. I was impressed by the pacing and the documentary realism. I wish there would be a decent USA DVD release. Thanks for writing about it.