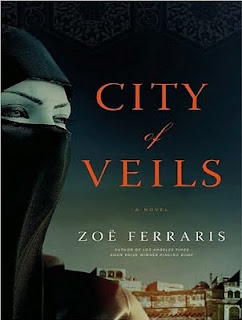 City of Veils, by Zoë Ferraris, is a sequel to the highly praised Finding Nouf, but City of Veils is even better. The world it describes seems almost like those science fiction tales in which a single aspect of the recognizable world is changed, and the result is an alien environment: here, it's not Islam but the status of women that is the factor that shifts the world of experience into the Other, and as with that genre of science fiction, the effect raises difficult questions about our own (Western) experience of reality.

A young woman's body is discovered on a beach near Jeddah, and the investigation falls to Osama, who thinks of himself as separate from the excesses of radical Islam but will ultimately discover the limits of his secularism when his wife begins to take control of her own life. The forensic tech who featured in Finding Nouf, Katya, takes a further step in her profession as she becomes involved in the murder investigation, and she involves Nayir, her collaborator in Finding Nouf as well. Katya is stretching the limits of the role of women in Saudi, and Nayir is stretching the limits of his own devout beliefs, and their relationship stutters on those difficulties. Miriam, an American married to Eric, a bodyguard who has taken a job in Jeddah, arrives back in the country from a month's holiday in the U.S., is stuck by restrictions placed on women first in the airport, when Eric fails to pick her up on time (stranding her in an office set aside for "Unclaimed Women" and then in her apartment when Eric suddenly disappears.

These threads of the story interweave along with the family of the dead girl, whom Nayir is instrumental in identifying. But at every turn, the burqa and all it siginifies is a key element in the story. Katya risks losing her job because she had to claim to be married in order to work. Miriam keeps tripping on her enveloping robe and can't see through the veil's narrow slit when she tries to go out on the street (where she risks attack or arrest by the religious police). Nayir yearns to ask Katya to marry him but is trapped in the inappropriateness of their current relationship.

The investigation ultimately leads to a disastrous sandstorm in the "Empty Quarter" of the desert that is right out of an Arabian adventure story, but the solution to the crime leads back to universals of family, money, and ambition. There is a great deal of detail in Ferraris's evocation of Jeddah, Saudi, and Islam as they are today and as they reflect their historical background. But there's no sense of preachiness or pedagogy: the narrative, the background, and the characters all combine to move the story forward. This is not a screed against Islam or Saudi: Western attitudes are portrayed as even-handedly as Near-Eastern ones, and both are implicated in the crimes. Ferraris obviously knows Saudi Arabia very well and her respect for the culture is as obvious in her portrait of Nayir as her criticism of attitudes toward women are in her portrait of Katya, to take only the two most obvious examples. Regardless of your knowledge (or lack of it) of Arabia, Islam, or Saudi law, and regardless of your familiarity with Finding Nouf, City of Veils is a very good book, and its ending teasingly suggests further developments in a sequel.
Posted by Glenn Harper at 12:38 PM

Thanks for this review Glenn. I was delighted to find I could add it to my Kindle

I found both of Ferraris' books wonderful reading.

FINDING NOUF revealed life behind the walls of the homes of the very wealthy. The separateness of men and women extends to the home so that girls grow up without knowing their brothers, strangers whose lives are so much fuller.

CITY OF VEILS reveals the problems of women whose family circumstances require they work to earn an income but who are nevertheless looked on as fodder for the religious police. Katya and Nayir risk the disapproval of society in general for wanting to make their own choices for a marriage partner.

FINDING NOUF is my preference. It reveals a life that women in the west cannot imagine.