Postcard Killers, by Liza Marklund and that other guy 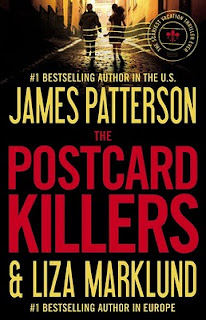 I just finished Postcard Killers, by Liza Marklund and James Patterson, which I read as a digital galley from NetGalley, courtesy of Little, Brown. The plot is a bit sketchy, told in Patterson's patented short chapters, and the characters are mostly two-dimensional. The story, though, comes alive when Dessie Larsson, a young Stockholm journalist, is on stage. Dessie shares a lot with Marklund's Annika Bengtsson (from her own crime series), especially in the early stages of Annika's career (as in the first of her series's prequels, Studio Sex or Studio 69).

Dessie specializes in petty crimes both in her academic background and in her current work for a fading tabloid newspaper and becomes involved in a serial killer story by being picked out by the killers themselves to receive their message when they arrive in Sweden. The killers have been active in cities around Europe, sending postcards and, later, photos of their victims, to selected journalists.

The victims are carefully posed to mimic the poses of characters in famous paintings, and the plot gets into the world of contemporary art in a way that is not altogether inaccurate (though some aspects are more than a little sensationalized).

One of the earliest victims was the daughter of a New York cop, Jacob, who is now pursuing them across Europe and inserts himself into the Stockholm police's investigation of the first murder in Sweden, as well as into Dessie's life and career. Jacob isn't an unbelievable character, but he's not fleshed out enough to carry the story on his own.

Dessie isn't as fully realized a character as Annika, and her biography is quite different, though there's some common ground. Dessie is from the far north of Sweden, and her family turns out to be very colorful (I won't say more), whereas the shady aspects of Annika's past are more her own personal traumas. But when Dessie is at the center of the story, the narrative and even the setting become more vivid. Stockholm and the north of Sweden are depicted in a lively and detailed fashion, much more so than the several other settings of the book.

I have no idea which sections were written by whom. There's some speculation in the blogosphere that Marklund must have written all or most of the book, perhaps filling in an outline supplied by Patterson. In fact, some chapters read more like an outline than a complete story. But in fact, the sketchiness of some chapters adds to the forward momentum (or at least make it easier to read quickly through them to get back to Dessie's story).

While not quite up to Marklund's usual standard (I have no idea about James Patterson's usual standard, knowing his work only by reputation), Postcard Killers is a fast and enjoyable diversion, and while Dessie seems a bit callow in comparison to Annika or another young journalist-detective, Denise Mina's Paddy Meehan, she's lively enough to carry this straightforward tale in the absence of any mystery. The killers are thoroughly introduced early on, and though the police have doubts even after the murderers are identified, the reader knows who they are. The killers are oddly uninteresting, given the lurid nature of their crimes (and their personal and professional lives); other minor characters, including several detectives (one of them Dessie's former lover) are more fleshed out and believable.

Dessie's family name might have been an hommage to that other Larsson, but Postcard Killers doesn't rise to Dragon Tattoo or Annika Bengtson level, But it's sometimes interesting, it moves along quite well, and I'm glad to have had the chance to glimpse Dessie and her urban and rural milieux. I'm also interested to see Marklund's forthcoming Annika story (the first, apparently, to carry the character's career beyond the first novel, The Bomber), after reading Dessie's story, and I'm also curious to see whether Marklund and Patterson produce further collaborations.
Posted by Glenn Harper at 12:51 PM

Ha ha! ;-) I'm probably going for this one as Liza M is one of my huge favourites. Pity about the other guy though.

Ha ha! ;-) I'm probably going for this one as Liza M is one of my huge favourites. Pity about the other guy though.