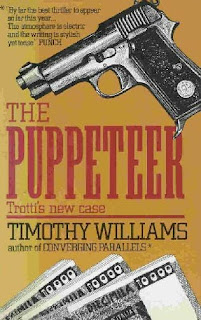 It's difficult to say much about the plots of Timothy Williams's Italian crime novels, first because the narrative is very indirect, requiring the reader to do a certain amount of work in tying together the story, and second because a lot of what's interesting about the books is more fun to discover than to be told about in advance. The second of Williams's Piero Trotti series, published in the mid-'80s, is called The Puppeteer in the U.K. and the The Metal Green Mercedes in the U.S. I can't even explain why the U.K. title is more appropriate without giving away a key plot element (linked to a famous Italian scandal that most of us outside Italy will have forgotten, but which resonates in Italian life and politics to this day).

The Trotti books are set in Pavia, near Milan, but a good deal of the action in The Puppeteer takes place on Lake Garda and in Milan. Trotti's wandering wife is in America (in connection with her work for a pharmaceutical company) and their daughter Pioppi is suffering from overwork (for her college courses) and anorexia. Trotti is visiting a family villa near Garda when a man standing next to him at a bar is shot, a professional hit. In seeking to determine whether the intended victim was the dead man or himself, Trotti discovers connections to an odd bank robbery, an attempt to publicize corruption at another bank, and echoes of a famous murder case from the beginning of his own career. 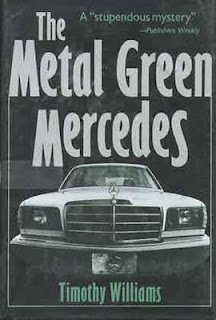 Among the distinctive features of this series is that members of Trotti's team move on (in a manner also adopted by John Brady in his Matt Minogue series) but are drawn back into his orbit when he needs their help. The characters are richly delineated and the plot is carried forward in alternating passages of vivid visual storytelling and realistic, oblique, and frequently darkly comic dialogue. If you find Williams's style difficult to follow at first, you will be rewarded for persistence in his deepening portrait of the crime, the cops, and the citizens implicated in the events.

Don't expect neat resolutions, though. Like Donna Leon, Williams refuses neat endings and portrays even more definitively than Leon the corruption that forecloses justice in Italy. What Williams does, at least in the first two books, is to tie Trotti's investigations into the big picture of Italian politics and society, through Moro's kidnapping in Converging Parallels/The Red Citroën and a pervasive social plague that I won't mention (just remember that "Beta" is the second letter in the alphabet when it crops up in the name of an organization) in The Puppeteer: The title of the first book in the U.K. refers to a speech by Moro, and the title of the second refers to a phrase uttered by a darker figure in Italian history.

A 2004 interview with Williams at the excellent Italian Mysteries site (http://italian-mysteries.com) indicates that there is a new Trotti book in the pipeline, featuring a now-retired Commissario. I hope the publication of that book moves forward promptly, as at the rate I’m going I’ll have run out of Trotti books in a few weeks…
Posted by Glenn Harper at 11:22 AM

Glenn,
I have been a big fan of the Trotti novels for years and given Timothy Williams high marks on my website: italian-mysteries.com.

Will you be attending Bouchercon in SF this year?

Carlo: Thanks for your comment, and many thanks for the Italian Mysteries site. It's a great resource (and was my primary source of info on Timothy Williams--including your interview with him). I'm not going to Boucercon in SF--too far to to, too much work to do...
thanks again,
Glenn

Several photos have text taken from the sixth Trotti novel.

I now have the rights to the entire Trotti series. Now if anyone knows of a publisher interested in the entire opus of six novels ....