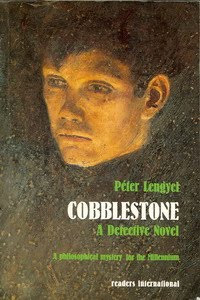 This week, because I've recently read two of the Marek Krajewski novels about Eberhard Mock of Breslau, I've been reminded of one of the most remarkable crime novels I've read, Cobblestone: A Detective Novel, by Peter Lengyel, a Hungarian writer better known for science fiction than detective fiction. But Cobblestone is and is not a detective novel. It's a massive story of the beginning of the 20th century, ranging across Europe but centered on a pursuit through Budapest's streets and brothels: a master detective pursuing a master safecracker.

And at the same time it's a meta-novel taking Hungarian history from the end of the 20th century back to the beginnings of the universe. Not only are there layers and layers to this tale, there is also a sudden shift at the middle of the novel that is unlike anything else in any other novel, detective or otherwise—I won't give it away, but it is either a masterstroke or the most irritating device ever attempted in fiction.

But back to the detective story, the tale is a fascinating mosaic of the underworld of Budapest, as well as a fantastic heist story. It unreels like at atmospheric movie, but it is decidedly a novel, not really filmable at all. If anyone's interested, I can give more details. It's not easy to find, but it's not out of print.
Posted by Glenn Harper at 6:38 PM

Perhaps it is a "sign of the times" or that genre fiction is becoming more open, but when I decided to write a novel about the "drug wars" in Mexico "An Inconsequential Murder" (http://www.untreedreads.com/?s=An+Inconsequential+Murder) I found that the crime novel/police procedural story was a perfect vehicle to explain to the reader the historical background that has led us to the present murderous situation. I think that no other fictional form can be as entertaining and informative at the same time, as this. And there is no need to be heavy-handed about it; in "China Town", the mexican-american detective who has just shot a woman sums up the prejudices and state of society of the time when he said, "Forget it, Jake - its China Town."

I hope that my novel is not only a good story but also a way to convey how agencies such as the DEA and FBI, conservative forces in the US and Mexico, and the corruption rampant on both sides of the border has led us to this terrible state of affairs.