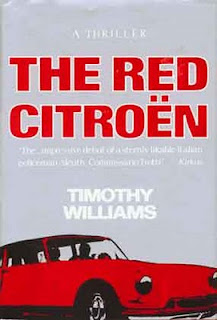 A few weeks ago, author Timothy Williams posted a comment here and asked whether anyone remembered his Italian crime series, which features Commissario Trotti, set in a unnamed city that is apparently Pavia, near Milan, on the Po. I confess that I had never heard of the series, five novels published between the early 80s and the mid-90s. I've learned a bit more about them, and finally yesterday got hold of the first in the series, called The Red Citroën in the U.S. and Converging Parallels in the U.K. (more about the titles in a minute).

Williams is almost exactly the same age as Michael Dibdin and Magdalen Nabb, and in the same generation as Donna Leon, and his novels began to appear at about the same time as those three most prominent English-speaking crime novelists specializing in Italian crime. And Williams's series (based on what I've read about the series and on my not-quite-having-finished the first novel) is the equal of those but is, if not forgotten, at least overlooked. 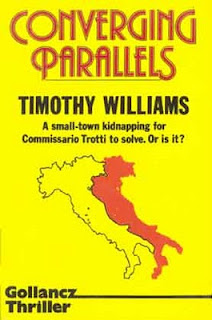 Is the lack of attention based on there being only five Trotti novels? On the fact that the city of the books is not named, thus cutting a nostalgic tie that visitors to Florence or Venice might feel for the works of Leon, Nabb, and sometimes Dibdin? I can't say, but the un-named Pavia of the series is vividly evoked, as is the whole Italian scene (physical, cultural, and social).

In fact, Williams is a very visual storyteller, in brief descriptions of setting and action between the realistic conversations and Trotti's own somewhat melancholy inner dialogues. The characters are not types, they are fully realized, and the setting is solidly anchored in Italian social history: Converging/Citroën concerns the kidnapping of a young girl, but the incident overlaps with the murder of Aldo Moro (in the background here rather than the full subject, as in Leonardo Sciascia's wonderful documentary novel). The Moro kidnapping by the Red Brigades, as well as the very prominently portrayed and discussed local (Communist-dominated) politics of the city, broaden the story out to become much more than a mystery-entertainment.

The U.K. title, Converging Parallels, comes from a phrase used by Moro to describe the "Compromesso Storico," the historic compromise that brought the Communists into political legitimacy. The U.S. title refers instead to a crucial plot point. For some reason, the U.S. publisher chose to "pitch" the novel as a conventional mystery, while the U.K. publishers were unafraid of the author's larger ambitions. Perhaps the American publisher was afraid of putting off readers, especially 15 or more years ago, with any hint of Communism as something other than a menace.

Judging from my first exposure to the Trotti stories, Williams's series is a bit of Maigret (especially in Trotti's team and the way he uses them) but livelier and a bit of Montalbano but without the overt comedy. Trotti's home life is troubled, with a wife who goes wandering but a solidly grounded daughter, so he doesn't have the family respite that Donna Leon provides to Brunetti. Trotti has his own troubles with the hierarchy in the Questura, and has reason to be as cynical about Italian justice as Brunetti, but Trotti pushes perhaps a bit harder against the social lethargy and under-the-table understandings that frustrate Brunetti. To keep the comparisons going, Williams differs from Nabb in that his detective has returned to his home region (rather than remaining an outsider, as does Nabb's Marshall Guarnaccia), and thus has a network of relationships (sometimes distant, but beyond those he has encountered professionally) on which to call. And Williams's writing is far superior to a couple of other Italian crime novelists reviewed here earlier, such as Timothy Holme or Grace Brophy or Christobel Kent. Of the newer non-Italians writing about Italian crime, perhaps Tobias Jones's The Salati Case most resembles Williams's style and quality.

I'll be posting again about Williams, since I also got hold of the second book in the series and have ordered the third (the last two have proved a bit more elusive on this side of the Atlantic, thus far). But I'm delighted to have discovered (thanks to the author himself) the Trotti series and wish that perhaps his new series, written in French and set in Guadaloupe, might find a translator (perhaps the author himself) and a U.S./U.K. publisher.
Posted by Glenn Harper at 8:09 AM

I've read all of the series. All excellent. I believe there was another book in the series which never got published which is a great shame.

The only book available in my library network is the GREEN METAL MERCEDES. I've placed a hold on it and I am looking forward to reading it.

What language was this book written in?

The Trotti novels were written in English. Williams has also written crime novels in French, but these were done in English.

Just so everyone knows, Soho Crime (who publish Williams's new Anne Marie Laveaud series, set on the French Caribbean island of Guadeloupe) are really pleased and proud to be reissuing all the Trotti books this fall, starting in October with a paperback reissue of Converging Parallels!