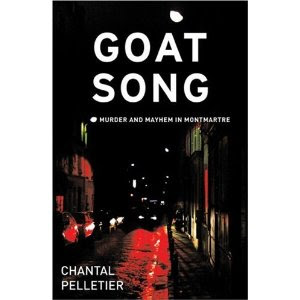 I thought I had reviewed Chantal Pelletier's Goat Song here a while back, but when I went looking for the review, there wasn't one. In fact, I could only find one review of the English edition on line (Sharon Wheeler's April '05 review at Reviewing the Evidence, republished at the Eurocrime site). If not quite forgotten, then, Pelletier's only book translated into English (so far) is unjustly overlooked, so Goat Song is a good candidate for Forgotten Friday.

Goat Song was in the first wave of translated crime novels published by Bitter Lemon Press, along with some now-better-known names (Friedrich Glauser, Tonino Beacquista) and has perhaps been eclipsed by some even better known names in Bitter Lemon’s subsequent publishing history (Gianrico Carofiglio, Leonardo Padura) and by the popularity of some other French crime writers (Fred Vargas, Dominique Manotti). Goat Song also shares a milieu with Cara Black’s Aimee Leduc series (the sixth of which is set in Montmartre, as is Goat Song), but I think Pelletier is a more interesting writer.

Inspector Maurice Laice is just returning to work from his father’s funeral and is confronted with the intertwined corpses of two employees of the Moulin Rouge, the lead male dancer and a youg female dresser. Maurice, who has become disgusted with sex, is also tormented by his boss, who calls him more-is-less (a bilingual pun on the Inspector’s name) and who forces descriptions on him of her own vivid sex life. The investigation winds through the cabaret scene, Corsican culture, drug dealing, and disastrous families and liaisons.

Maurice (or Momo) is a fascinating and witty character and Pelletier’s language is lively and quirky, turning with comic rapidity from an observation to an image or a train of thought leading in a completely different direction. Not having seen the original French text, I can only imagine the difficulties that translator Ian Monk must have faced, but the result is an excellent and creates a refreshingly different style for noir writing. And noir it is, given the setting and Maurice’s melancholy frame of mind. The inspector’s wealth of personal and professional experience saturates the narrative, though it is told in the third person.

With the news that Jean-Patrick Manchette will soon have a third book in English translation, perhaps this is a good time to seek out a very different French style of crime: Pelletier shares little with Manchette’s very political but classic noir or Manotti’s hard-edges police procedurals; perhaps her Inspector has a bit more in common with Vargas’s idiosyncratic Chief inspector Adamsberg, but with a more melancholy (yet comic) and less intuitive approach to life and police work. Goat Song is short but with plenty of plot, vivid language, bloody murder, and sensual evocation of the Parisian scene.
Posted by Glenn Harper at 1:29 PM

Thanks for this piece, I am definitely going to try this author sometime, as I am a bit remiss in my French author reading.