Listening to The Locked Room 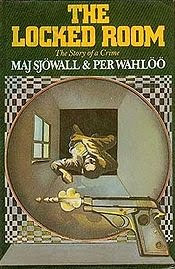 On a weekend drive last week I listened to a recorded books version of the only Maj Sjöwall Per Wahlöö novel that has never been filmed (as far as I know), The Locked Room, translated by Paul Britten Austin and read by Tom Weiner. It was particularly interesting to listen to the book after recently reading Wahlöö's two Jensen novels, because the considerable number of political diatribes in The Locked Room share a good deal with the dystopian social portrait of The Steel Spring and Murder on the Thirty-First Floor.

But Tom Weiner's choices in portraying some of the characters highlights a problem for the recorded book: how to convey regional and class differences in translated fiction. Oddly, Weiner chose to use British lower-class accents for some characters, American accents for others, and British upper-class accents for a couple of others. I would probably have found all-British accents irritating, but mixing up two nationalities was bizarre. I don't know the answer, and translators struggle with this problem in text--but in a spoken version of the book, the accents almost ruined the book. The lengthy editorializing (concerning the Swedish mixed socialist/capitalist system) were also a bit irritating to listen to (more than to read, I think). 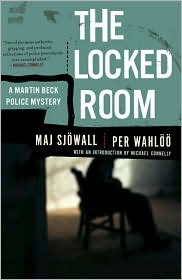 The Locked Room was my favorite of the Martin Beck novels when I read them for the first time, just after they were translated 30-ish years ago. Perhaps it was the problems with the oral delivery, but this time I found some aspects (such as the idealized hippy landlady and the Keystone Kops police raid) a bit less convincing. Still, the plot is convincing, ironic, and dramatic and the police investigation leads inexorably to one mistaken conclusion and one troubled and comic interrogation in which Martin Beck seems to have gotten entirely into the head of the interrogatee.

So while I still highly recommend The Locked Room, I won't be recommending the spoken word version. Perhaps someone will fine a better solution to translating and speaking the nuances of Swedish accents.
Posted by Glenn Harper at 1:26 PM

Audio books are always tricky. Sometimes the narrator is great, other times...annoying.