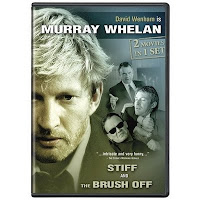 There are a lot of Shane Maloney fans outside of Australia, but I would guess that not many are aware that the first two of his novels (Stiff and The Brush Off) have been made into movies (directed by Sam Neill). The movies (made for TV--and apparently Australian TV is less inclined to censor certain language than is the case in the U.S.) are available in a 2-DVD package from a Canadian distribution company that also distributes the Taggart series from Scotland (if you've ever had a chance to see those) and some John Thaw series including Morse. The Shane Maloney DVD set is called Murray Whelan, after the central character of Maloney's crime/comedy/political series, the personal assistant/fixer for a minister of various portfolios in the Labor Party in Melbourne. The first of the two movies is faithful to the novel, Stiff, to a fault. Stiff is a good mystery novel with a political twist and a good deal of sarcastic and situational humor, but in my opinion, Maloney's series really hits its stride with the second novel, The Brush Off--and the same is true of the films. There's a little too much back and forth motion in Stiff, even a bit too much going on. The Brush Off is more coherent, more stylish (since Murray's boss is Minister of the Arts by now), and funnier (plus Murray gets a little more compensation for the violence he suffers). Maybe Australian readers and bloggers out there can let us know if there are more Murray Whelan movies in the works (or even already released), and how well received they were in Australia. Plus one more question--as I recall, the novels were about regional politics rather than national politics. That's not so clear in the movies--would the regional politics be assumed by Australian viewers because of the Melbourne location, or did the films perhaps "nationalize" the stories? In any case, if you have a chance, and especially if you're a Shane Maloney fan, the Murray Whelan DVDs are a lot of fun, and a very effective visualization/dramatization of the first 2 Maloney novels. (Now if somebody can only tell me how to get hold of the most recent Maloney novel, Sucked In, without paying a fortune in shipping...or for that matter whether there are indeed any more Whelan movies available in region-free, NTSC versions?)
Posted by Glenn Harper at 7:18 PM

The Whelan telemovies were very well-received here in Australia, and the two main forces behind them (Sam Neill and John Clarke) both wanted to continue with the series. I think it goes without saying that Shane Maloney was also pretty keen.

But internal television company politics prevailed and the producers couldn't get any money to continue. I think the tv station wanted to follow a down-market reality-tv line. And the difficulty of selling Australian content overseas may also have been a factor.

Anyway, there haven't been any more adaptations of the novels and, to the best of my knowledge, there are no more planned.

David Wenham is very good as the laconic Whelan.