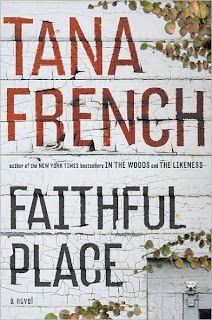 Faithful Place is the best of Tana French's three crime novels but may disappoint some who appreciated the college-adolescent, closed-circle ambience of her previous book, the Likeness. Though in fact a minor character in that book, Detective Sergeant Frank Mackey of the Dublin undercover squad, is the main character and narrator of Faithful Place (French has been daisy-chaining her main characters like that through all three so far—and there's an interesting cop in a minor role in this book that we can take bets about, as the lead of a future book; his name is Stephen Moran).

Faithful Place takes us into Angela's Ashes territory, which Mackey himself recognizes. He is drawn back into a family he fled 22 years earlier, in the working class Liberties area of Dublin, when the girl whom he was to have run away to England with (but who never showed up at the rendezvous) suddenly seems to have been murdered rather than to have had second thoughts about Mackey. Mackey repeatedly refers to his family in extreme terms, though to me they seemed only a little less horrible than many a family I've had contact with. And Mackey, who was a senior, respected figure in The Likeness, seems to have regressed to young adulthood here. In fact all the males in the book seem like arrested adolescents (perhaps French's point), and her female characters are a lot more interesting as people, and more believable as disappointed-but-get-over-it adults.

Readers will have figured out well before the end who the murderer is, and Mackey is less a cop here than a member of a domestic-Gothic scenario. He, of course, is forbidden to investigate a crime he is so close to, but, of course, manages to do so anyway (fitfully, at least: it's not really his investigation that breaks the case; he's handed the solution by a couple of unlikely figures, but French pulls off the unlikelihood without stretching credibility).

Ireland is here perched just on the verge of economic collapse, and only one person really seems to see it coming (and he seems to be yearning for the disaster). The fact that we know more about that than Mackey as narrator adds a level of melancholy to an already mournful book. There is some leavening humor in the dialogue among the characters, which ranges from civil to mad-attack-dog to pub banter. Faithful Place (named for a street on which most of the action takes place) is not a pleasant book, but it's a truthful and poignant portrait of a cop and a family under extreme stress (from several different sources).
Posted by Glenn Harper at 12:29 PM

I have had as many people tell me it is worst book as that it's her best book. Maybe you have explained why.

The Donna-Tartt-like quality of the previous book could be a real litmus test. Not a positive one for me, and I'm glad Faithful Place is missing that sort of thing: it (instead) is based on a totally believable portrait of a messed-up family (where both previous books had a fantasy-like quality, each different from the other, the third book is solidly grounded in real, if grim, truth).

IN THE WOODS and THE LIKENESS were primarily murder mysteries. FAITHFUL PLACE is an analysis of family ties and responsibilities. Irish families are generally matriarchies; I've known women who could have been the base on which the author built Frank's mother.

Frank got away once but it isn't likely he will a second time.

I like the way you put it: "Frank got away once..." Does that make the ending a reconciliation or a tragedy?
thanks
Glenn